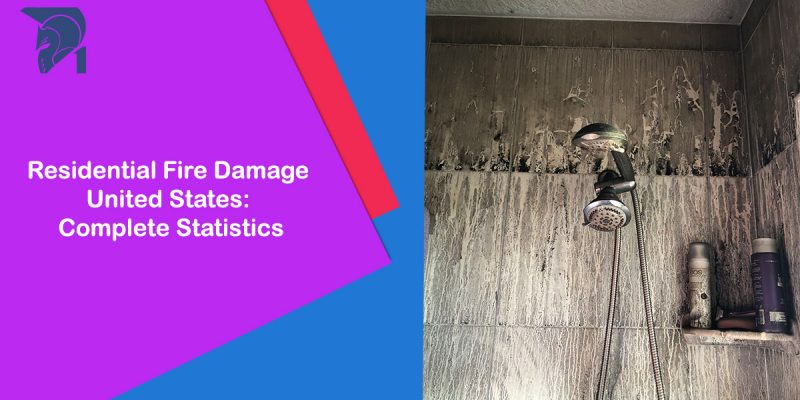 A fire breakout is unpredictable. For residential and commercial properties, the potential damage from a fire breakout can be catastrophic. Any victim of fire damage goes through both physical and emotional consequences, in addition to the stress of applying and winning a fire insurance claim.

This piece of content features common causes of fire damage along with the statistics:

As per the National Fire Protection Association’s (NPFA), report (2012-2016), fires from electrical failures and malfunctions were the second major cause of residential fires in the United States.

The local fire department responded to an average of 37630 home fires triggered from electrical malfunction, electrical distribution, and lighting equipment failures during this period.

While these mishaps claimed an unfortunate 18% death rate, the property damage peaked at around 20%.
Nearly 39% of these fires occurred between November – February, surprisingly these were cold-weather months.
In 3 out of 5 homes, the malfunctioned electrical appliances were armed with arcing as the heat source. 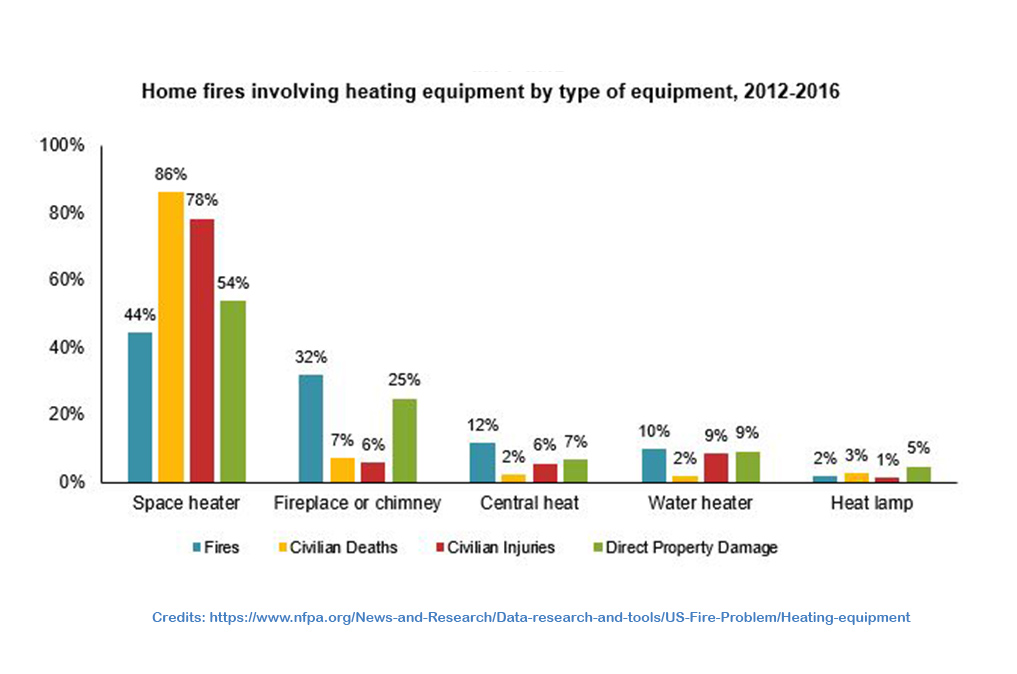 Stationary or portable Space was the major heating equipment involved in home fires.

Improper or failure to maintain heating equipment is the major factor that leads to home fires.

Keeping heating equipment too close to combustibles was the major cause of ignition. 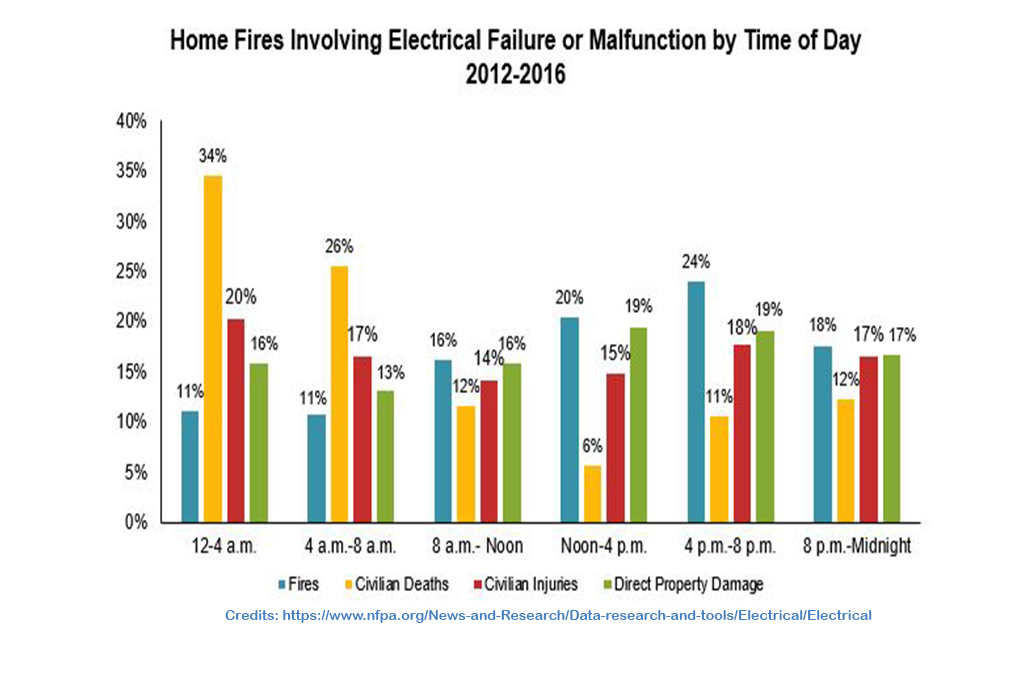 Between 2009 & 2013, the fire department responded to 9300 residential property fires caused by candles. As per the reports, the main areas of candle fire breakouts are bedroom, living room, and bathroom.

The leading factor that contributed to the ignition was the placement of combustible things close to burning candles.

More than one-fourth of the grill fires reported during the period 2012-2016 was triggered due to cluttered or clogged grills.

The main areas of grill fires were balcony or open porch.

Gas operated grill fires were the major grill type that lead to residential building fire compared to charcoal and other solid fuel.

As per the NPFA, lightning strikes contribute to an average of 22,500 fires in the United States every year with estimated property damage of $451 million per year.

Florida is known for many lightning hazards that lead to fire damages on an annual basis, earning it the reputation as the lightning capital of the U.S.

On an average 10 to 13 people lose their life to lightening in Florida annually.

Wildfires are another natural cause that contributes to natural fire disasters to a residential property in the United States.

The damages incurred from fire caused due to these natural causes may be covered by a homeowners’ insurance policy. Some policies even cover temporary living expenses if your family is forced to move out of an area due to the risk of lightning fire or lightning strikes. Ensure that you do in-depth research on these options and foresee the risks and vulnerabilities related to your state and its weather statistics.

Smoking materials were accountable for 1in 20 residential property fires in the United States.

Open porch and balconies in residential structures were the common areas where the smoking material fire broke out.

Bedrooms and balconies contributed to the popular areas where the smoking material fire broke out and lead to deaths.

Proper disposal of smoking materials is critical for fire breakout. A fire triggered by an improperly disposed of smoking material outdoors can spread into concealed spaces within the property. Such spread can take it times to do the damage before the smoke triggers the emergency alarm. 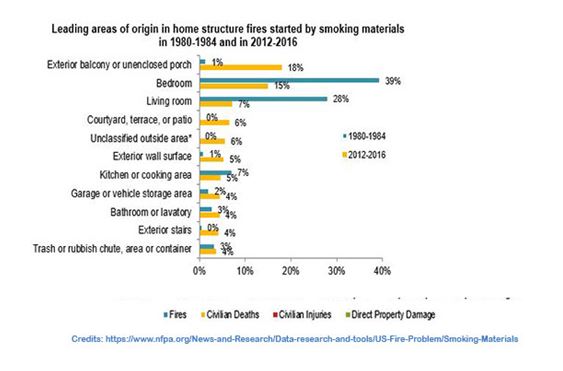 Christmas and Thanksgiving were the popular occasions that contributed to cooking-related home fires.

Electric cooking equipment was linked with higher risks of fire breakouts compared to gas cooking equipment.
Unattended cooking was the major reason that leads to cooking fires and causalities throughout the United States. 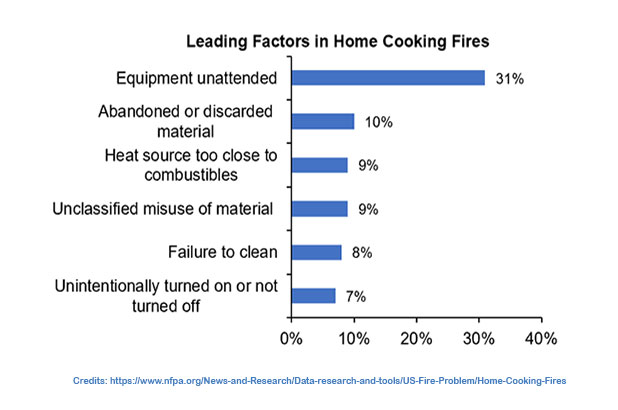